Finally sticking to a get-fit plan was one thing. Letting the momentum seep into other aspects of life was the next.

“Last summer’s clothes didn’t fit as nicely this summer,” admits Warren Gouws. He was ready to do something about getting into better shape. So when his friend invited him to register for the New England Tough Mudder, a 12-mile obstacle course, Warren figured that was just the motivation he needed.

Still, days would go by, even weeks sometimes, when Warren didn’t work out. “I kept telling myself I wasn’t in such bad shape and that I could easily start working out next week,” Warren says.

He just didn’t get into a groove until one of his friends asked him if he had thought about doing one of the NeoLife Club BE YOUR BEST Challenges. Maybe that’s what I need, Warren thought, and the next thing he knew, he was making a video to send in for the Fitness Challenge.

That cemented Warren’s commitment. His video got views and comments, and he knew that people now knew what he had committed to do.

He began his early-morning workouts. “The first two weeks were difficult,” Warren acknowledges, “but it quickly got better. I kept on going, and shortly started seeing and feeling a difference.”

He upped his product use as well. Warren had been on the NeoLife nutritionals for years but decided to add the NeoLifeShake. If he intended to climb ropes, he figured it would be easier if he were lighter. Within a few weeks of following the program with the NeoLifeShake, he was down 12 pounds.

Now Warren was so motivated that he began to add time to his workouts and listen to self-help audios as he exercised.

“A single thing like getting more fit got me wanting to improve in other areas,” explains Warren. “The whole personal development aspect of my life began opening up and getting better.” 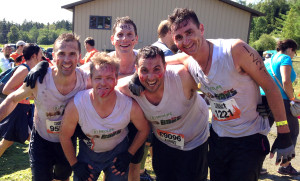 Warren ended up completing his initial fitness challenge in July. He continued on his fitness journey and felt strong going into the Tough Mudder in August. “I wasn’t even sore afterwards,” he smiles. As a result of him starting with an initial 30 day fitness goal and extending it to a 90 day goal while documenting his progress along the way, Warren won the 90-day BE YOUR BEST Men’s Fitness Challenge in October. His friends and team are following suit—many committing to a 30 day and 90 day challenge as well. The impact of his setting a goal month after month has benefited all areas of his life, not just his health. Warren is even planning date nights with his wife Riette, something he hadn’t done in years.

Warren sees it simply. It’s just one step, then another, then you gain momentum, and things start happening for you in various aspects of life. His defense against going back to his old ways is simple: paying attention. He’ll often stop and ask himself: What am I doing? What am I accomplishing?

Staying aware keeps Warren focused on his intentions and guarantees he takes the right action.