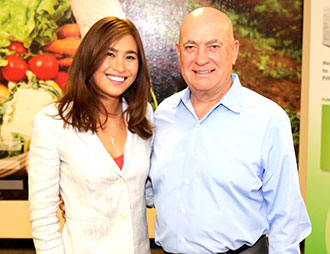 Welcome to today’s podcast. This is our very first episode of The Founder’s Table. Growing up, the most valuable education I got didn’t take place in school or even university. The lessons that I have personally found to be priceless in developing a mindset for success, and wealth management, and other critical aspects of being an entrepreneur mostly took place during candid, off the record conversations with my father and other successful people who have been there and done it. And that’s what we want to accomplish in this space—to invite listeners into those candid conversations.

So let’s start from the beginning. JB, can you tell us about what life was like growing up?

Jerry: Thank you Kendra. Life for me, as I think back on my early childhood, things that stick out in my life are my health, which was very poor. My family, we were a loving family, we were maybe a notch above the poverty line but compared to the other kids that I grew up with and went to school with, we did not have as much as most people and although I think of it as a happy time I also think of it as a time of struggle.

Kendra: In addition to the struggles that you had growing up in a household that didn’t have a lot of wealth, what were some of the other health challenges that you struggled with growing up?

Jerry: Well of course asthma was my main struggle and I seem to have had a severe case of asthma, which was threatening to kill me every year. It’s worse especially during the growing season when the crops were in bloom and all the dust and pollen associated with the farming area that I was in. And the fact that I turned out to be having allergies as well as many things that contributed to severe asthma and that asthma dominated my life. In my early childhood I struggled.

Kendra: I always really enjoyed when I get to hear you tell the story of a moment when you really had a wakeup call to fight for your life and it gives us a glimpse into how bad your asthma was. Can you tell us about that night?

Jerry: Yes, that stands out because I grew up in a Christian home and my mother was the spiritual head of our family and on one particular night I remember that she called the minister of our church, Reverend Anderson, and asked him to come to our little house. And he came I didn’t know he was coming but when he showed up I was sitting up in bed and I was pulling for every breath. She of course welcomed the minister in our home. The walls were thin so we could hear from one room to the other if there was talking, and so outside my bedroom that I shared with my brother Bob there was conversation with my mother. I heard her say to the minister apologizing for calling him in the middle of the night and saying the only reason that she did it because she was afraid that I was not going to make it. I was not going to live through the night! And so I heard this and that was definitely a wakeup call for me if anything it just made me more determined that I am going to try to survive.

Kendra: That is a great story and now your mother didn’t stop at prayer did she? Can you tell us about what she ended up going and doing that really was a turning point in your life?

Jerry: Yes my mother believed in prayer but she believed that in taking action herself and that God would lead her in the right direction. Through networking with other people in the community and other mothers, one of her friends had a son who benefited from supplementation and this lady friend introduced my mother to supplements. She brought them home and these were things like cod-liver oil that you take by the spoonful right out of the bottle so it didn’t taste very good at all and it was also multi-vitamins in the form of liquid vitamins. In those days you have to keep in mind this was 62-63 years ago that it tasted so bad that they didn’t even think about trying to cover the taste of the vitamins with flavors. So my mother forced me to take these everyday she would call me to come to the stand in front of the refrigerator come on it’s time to take your vitamins and your supplements and then she would give me a spoonful because I recall two spoon full of each these—large table spoonful of cod-liver oil and two large spoonfuls of vitamins and boy you had to choke this down with water and I hated it.

Kendra: I think if I recall correctly, nutrition really wasn’t something mainstream like it is today. How was nutrition viewed back then?

Kendra: Now shifting a little bit, I just want to fast-forward a few years. I often find that people are surprised to find out that you weren’t formally educated in university and I think you mentioned after attending only one half of one semester of college you decided on a different course. Can you tell us about that decision and what was going through your mind at that time?

Jerry: Yes, I think that looking back on it I maybe questioned everything around me more than I saw my peer group questioning. For example, I was studying at the local college. It was free, Porterville Junior College. I went in to see my counselor, it was mandatory and I wanted to find out what I should be taking course wise. I was concentrating on engineering courses that would lead me into that direction, so a lot of math. I asked my counselor what I could expect when I became an engineer and he looked at his book and showed me some numbers. He said I could go to work for four hundred dollars a month that I would maybe get one thousand dollars a month, maybe once I served my apprentice. And that of course would be maybe equivalent to five or six thousand dollars a month now, and maybe more. But I looked at him and he could not give me satisfactory answers. And as I looked at him, I just saw a man sitting there with his lunch pail, with his rundown shoes, with his suit that didn’t fit, and I looked at him and I just said you know this is not anybody I want advice from. When he finished that interview telling me what I could expect I walked directly from there to my locker, took my books out, walked into the office, set them on the counter, and walked out and got into my car and drove away. I decided that this was not for me, and not knowing exactly what I was going to do, but I knew that I was not going to be held back by people like this counselor in college.

To listen to the full interview, subscribe to NeoLife Podcast:
• Podcast App for iPhone.
• Podcast and Radio Addict App for Android.

Other topics in The Founder’s Table- Episode 1 include:
• Jerry’s first introduction to Direct Selling & the fear of loss that got him to go to the meeting.
• How mentors have contributed to his success & how to find the right kind of mentor.
• The importance of giving, sacrifice, and balancing life, work and family.