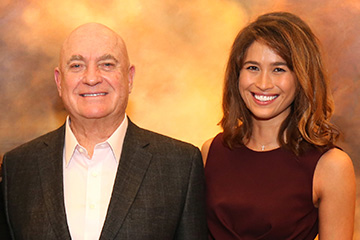 Kendra: Let’s talk about a simple strategy that you incorporated into your own Promoter business that lead to explosive growth in your team. Can you share the background of what you were seeing that led you to develop this strategy?

Jerry: When I started I noticed that meetings I attended were all over the place with their length and structure. All very exciting but the presentations weren’t leading anywhere. I remember watching a Billy Graham crusade and thinking “why can he fill up a huge stadium while at the same time some churches struggle to get a few people in the door?” They were selling the same product basically which was Christianity and the teachings of the Bible, but with very different results. I saw a pattern that led to my development of the Psychology of a Presentation.

Kendra: Can you describe the 4 parts of the Psychology of a Presentation?

Jerry: Yes. The first part is identification (ID), where you want a reaction from people which says “he or she is just like me”. We do that by talking about things in our life which revolve around our family, children, where we live… things that make people feel comfortable so they see that we are relatable.

Kendra: When we were recently at a leadership school in South Africa, you used a powerful analogy for the ID step, which was to take down someone’s ‘invisible shield’.

Jerry: Absolutely, we have to realize that when someone comes to a presentation they have already made up their mind that they aren’t going to buy anything. Often the husband/wife will say “honey, you know we’re not going to buy anything so just remember that. We’ll listen and be nice, but we won’t do anything”. I call that the ‘invisible shield’, which gets lifted when we identify and they have a reaction that says “he/she is just like me”.

Jerry: Once we answer the question on their minds of “who is this person speaking?”, the next step is to answer “what are you doing here?”. That’s where Logic & Reason, the second step, comes in. This is where we talk about the industry, the NeoLife company and our 60-year heritage, and we logically explain why we’re here and what we’re doing. It doesn’t have a lot of sales punch to it. We’re just looking for the reaction “yeah, that makes sense”.

Kendra: What is the third step?

Jerry: Step three is where we want to make people realize where they are. People can become numb or blinded because everyone is in the same boat. They don’t want to look at the facts and statistics. For example, 65% of people in retirement age can’t afford to retire. The numbers are appalling. And it’s not our fault. We’ve been sold that if we have a good steady job and a good education everything will work out okay. We then are tempted to buy everything we cannot afford at the present time on credit cards, instead of saving for it. Then those high interest rates keep us broke. In most cases we end up at the end with not enough money to even think about retiring.

Kendra: That’s true. Right now on average, in the US, retired people are depending on the government for 90% of their income.

Jerry: Yes, and with inflation it never keeps up and people are downsizing, they have to move out of their homes, they have time to travel but now can’t afford to travel. I like to point out these things and that it doesn’t have to be that way. I don’t want to make everyone miserable, but how about just being aware because there are things you can do about it.

Kendra: That’s a great point. We have to give hope as well. To summarize, step 3 is to Attack the Problem & Confess. Where our goal is to get people to say “I’m in trouble” whether it’s on the opportunity/finance side or the health side.

Kendra: That leads us to part 4, the Solution… NeoLife!

Jerry: The solution to get out of this trap: if you can find something you can do and that you are willing to do, you can have a small home-based business that can grow into a very large business and it can provide extra income into your family and into your budget very fast. I knew that I could talk to people. I’m willing to talk to people. I had a product story because of how my own health benefited from supplementation, and I saw that it was affordable for me. I didn’t need a lot of capital to get started. The worse thing that could happen to me is that I take both boxes of product instead of selling one. The same goes for our Manager and Senior Manager kits, the worst thing that could happen is that you end up with a few months of great products to use if you decide not to do the business. That’s the downside. But the upside is you might create $500 – $1,000 a month income out of your little business which can grow into much, much more. Once you’ve presented the solution it’s time to quit talking and sit down with people work out a plan for them according to what their needs and goals are. 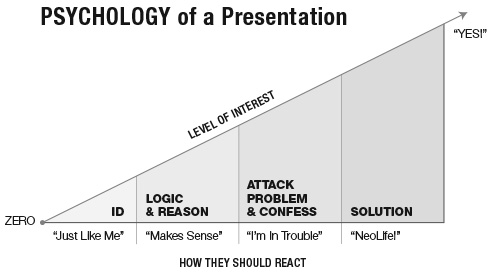 Kendra: Can you speak to how this Psychology of a Presentation format served as a training platform for your team?

Jerry: I divided this into three speakers. I didn’t want the meeting to last more than an hour. Speaker number one could be the newest kid on the block who just says a little bit about what you’re going to see and thank you for coming and welcome guests (2-3 minutes). They then introduce speaker number two who gives a brief ID and talks about the company and products and brings up a couple people for 2 minute testimonies. Short testimonies are verification that there are other people using and benefiting from the products (15 minutes). Then the third and final speaker gives their own brief ID and then presents the problem and solution. Your last speaker is usually the most experienced speaker of the three.

Kendra: This meeting doesn’t take more than an hour, right?

Jerry: Here’s what I’ve found: if the main part of the meeting takes more than an hour, your results start to diminish because of several things. One, because people have busy schedules and the more time you take in the meeting, the less time you have to talk at the end. Second, if you want them to join and invite other people, it’s easier to get people if they can say “look, come to this presentation with me, it will only take an hour”. If you go three hours they’re going to say “well, you better allow three hours” and people say, “well, I don’t have three hours so I can’t go”. What happens if you go longer than an hour for the presentation is that the number of guests coming in the future will diminish and fewer people will join your business because of the time.

Kendra: What happens if you have a guest speaker?

Jerry: Then you tack them on at the end of the third speaker. 20 minutes max. So now your meeting is still under 1 hour 30 minutes, and you can still take 30 minutes at the end to finish closing individually and get people signed up.

Kendra: Now we have the 4 parts: ID, Logic & Reason, Attack Problem & Confess, and Solution. If you could give us a big picture takeaway with where we should focus, what would that be?

Jerry: Where are we going. That is something people leave out so easily. The future, the hope, what are you going to do. This needs to be communicated from the company and Promoters, painting the picture of where we’re going and the success people are going to have in the future. Too many times we get caught up talking about the past 60 years and where we are now. But there’s always problems to talk about, unexpected challenges and so on. But if we get caught there and don’t paint a picture of the future, then the person we are talking to can’t see the future clearly. We need to constantly show where we are going and the hope and potential involved.