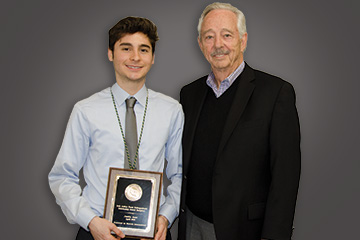 This year at the 24th annual Dr. Arthur Furst Undergraduate Scholarship Award, family members, faculty, and NeoLife staff recognized the efforts of this year’s awardee, Justin Azar. Justin is a junior at the University of San Francisco and studies both biology and chemistry. His research mentors and advisor commented on his academic abilities and his positive attributes as a person that match with the ideals of the Dr. Arthur Undergraduate Furst Scholarship Award.

This award is in honor of Dr. Arthur Furst’s legacy as a pioneer in disease prevention using nutrition. His contributions are vast but most notably include being the founder of the Scientific Advisory Board for NeoLife in 1976. As a pioneer in toxicology and cancer research, Dr. Furst aimed to advance science and was interested in studying areas that were not well understood. As a researcher in science, he found it was important to recognize and support students with outstanding academic achievement. He created this scholarship in 1995, to help students achieve their goals and to encourage them to pursue research and advance the scientific field.

As a double major in biology and chemistry at the University of San Francisco, Justin has been able to develop thought processes embracing both majors. Justin described that his passion for biology and chemistry stemmed from his desire to understand how molecules and processes interact with one another and from his fascination in gaining more in-depth knowledge studying the two topics. Though in biology, Justin learned about the basics and function of cells at a larger scale, chemistry helped him understand how things work at a smaller and deeper depth. Organic chemistry was the class that escalated his focus in the field of chemistry because he was intrigued by how processes with chemicals and molecules work and by the creativity one could have through the work of the synthesis of chemical reactions.

In exploring chemistry, Justin found himself being able to delve more into research by being a researcher in the Castro Karney Lab where he worked on developing and mastering processes to enhance data analysis in quantum mechanical calculations. He applies his knowledge of both biology and chemistry to allow him to perform calculations in a more thorough manner. The results of the research conducted in the lab will be presented at the American Chemical Society conference in New Orleans in 2018 and Justin will be presenting his own results at the Northern California Undergraduate Research Symposium. Aside from his coursework and conducting research, Justin volunteers for the Institute on Aging as part of the “Friendship Line.” This is a crisis line for adults over 60 years old and adults living with disabilities. As part of his volunteering role, Justin provides an empathetic ear and caring conversation with older adults who may be going through difficult issues. Justin describes that his experience with this organization has allowed him to develop skills of empathy and communication. He says that he values and recognizes the importance of human interaction and as part of this volunteer opportunity, has been able to interact and help many individuals experiencing difficulties in their lives. Justin believes that these skills of human interaction can also be applied to the research field where constant communication is needed within a team. 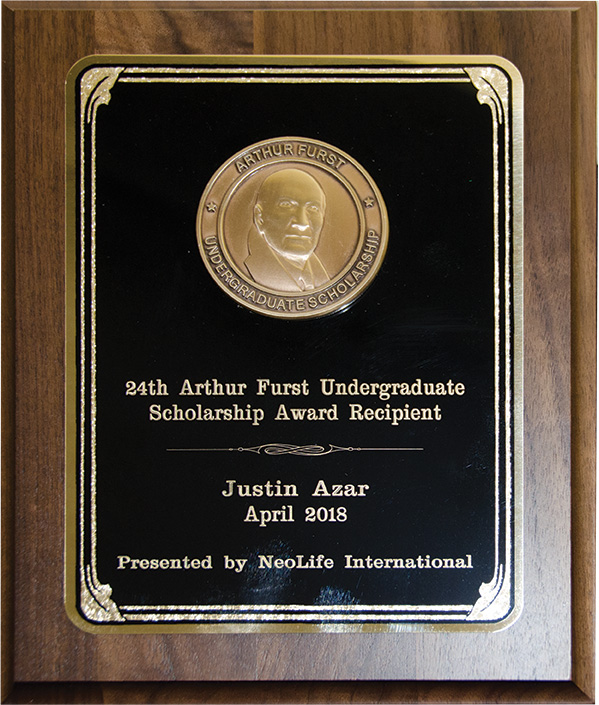 Justin’s level of passion and dedication was described by his professors, Dr. Claire Castro and Dr. William Karney, who voiced positive impressions of Justin’s work ethic and ambition in the field. His professors noted that Justin was able and eager to conduct research in an entirely different aspect of chemistry in which he had no prior knowledge. Additionally, Professor Brian Thornton, the chair of the biology department at the University of San Francisco, stated that Justin showed exemplary scores in his courses and that “he handles incredibly complex concepts with ease.” This was also acknowledged by Justin’s research professors who described that Justin “quickly moved to intermediate and advanced methods” in studying reaction mechanisms. The professors acknowledge Justin’s interests are very diverse—that he has taken courses in neurobiology as well as medicinal chemistry to expand his knowledge in the chemistry and biological fields.

Justin started taking more courses in neurobiology and there have been components of neurobiology that excite him the most—such as understanding how chemicals in the brain may be able to control emotions and consciousness. When speaking about his influences in research, Justin described that his advisor and research directors have helped motivate him to both pursue a double major in biology and chemistry and motivated him to do the very best in his work. In the future, Justin would like to attend graduate school and is interested in applying to doctoral programs to continue his passions and interests in the scientific field. Justin states that he is open to the opportunities that may arise in the future, including working in research or teaching.