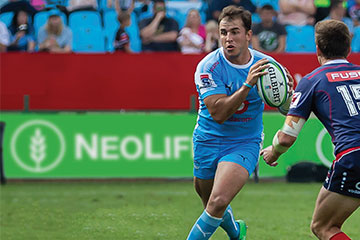 At the height of the busy rugby season, Burger Odendaal made time to talk to NeoLife and tell us the amazing things that NeoLife is doing for him. Originally from Krugersdorp on the West Rand, the now Pretoria-based Burger climbed the ladder from playing against the “bulletjies” (little bulls) in the schools’ junior rugby leagues to proudly captaining the Vodacom Bulls for the past two years.

This twenty-five year old rugby superstar’s association with NeoLife started several years ago when he started using the products. Since then his belief in the products has grown and been affirmed by his own results and the results of fellow players like Francois Hougaard, who also supplements with NeoLife Nutritionals. “I wish I had started supplementing with NeoLife earlier. It certainly gives athletes the competitive edge needed to make it in the tough world of professional sport” Burger explains.

“Anyone who lives an active lifestyle should supplement with the NeoLife core products because they make a huge difference. I take Pro Vitality, Cal-Mag, PhytoDefense, Performance Protein and NeoLifeShake daily. It’s so convenient that I hardly have to think about my supplementing routine” Burger says. “NeoLife Nutritionals are also great if you’re not so active. I’ve been encouraging my dad to have a NeoLifeShake for breakfast and he has also seen a great improvement in his general health and energy levels. It just shows that it’s really very easy to be healthy with NeoLife.” Burger explains. 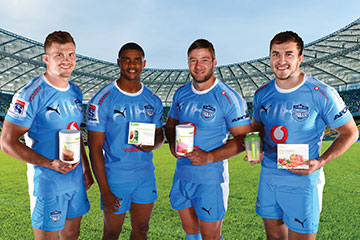 “I’ve been a NeoLife Sport Ambassador and part of the NeoLife Family for almost 3 years now. I say its family, because it’s just that. I’ve been touched by people of all ages and backgrounds who firmly believe in the goodness of NeoLife. A year or so ago, while on tour at the coast, an 80-something year old man approached me and a couple of my team mates on the beach and asked me what supplements I took. He was overjoyed to hear that I was taking NeoLife, because it was that same products that had kept him active and healthy over the years. He said NeoLife products are just the best and he was proof how well the products work. NeoLife is not just a company but a group of people on a mission to help people live healthily” says Burger with conviction.

I’ll comfortably recommend NeoLife Nutrition to any person. Whether you’re a couch potato, professional athlete, kid at school or an elderly person – the right nutrition will make a difference. Personally, I can’t imagine doing what I do daily without NeoLife Nutrition” says Burger.

Asked about the future, Burger shared some of his goals and aspirations. “I’m working on getting the Bulls to reach their full potential and hold the Currie Cup and Super Rugby trophies again. I know that our talented players have it in them to be the best. I’m also focusing on a more holistic program, where NeoLife Nutrition will play an important part alongside training to help the team reach their full potential” says Burger. Of course, his next goal is to play for the Springboks. “Playing for the national team is every rugby players’ dream. It would be such an honor to represent my country abroad” says Burger. “I’m also looking forward to playing in Japan at the end of the year. I certainly will be taking along my NeoLife Nutrition to keep me in top form.”